Clinch County voters will have six local contests to decide this year.

Qualifying ended Friday at noon for this year’s local county elections, with six contested races, and a number of other newcomers qualifying for elective office.

The most heavily-contested race will be for Clinch County Sheriff, as three challengers qualified to run against one-term incumbent Sheriff Raymond Peterson. Former  Homerville Mayor Tom Kennedy, Clinch County Board of Education Chairman John Davis, and retired DEA agent Stephen Tinsley all are seeking to unseat Peterson in the Republican primary. 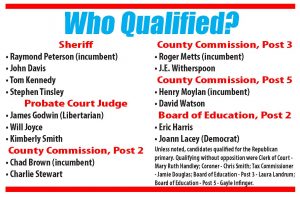 There is also a race to replace the retiring Karleen O’Berry as Probate Court Judge. Kimberly Smith, who works in that office, Clinch County EMA Director Will Joyce, and James “Bill” Godwin are contending to lead that office. Joyce and Smith qualified for the Republican primary, while Godwin qualified as a Libertarian. In the other county constitutional offices, incumbent Clerk of Court Mary Ruth Handley incumbent Tax Commissioner Jamie Douglas both qualified without opposition, but there will be a new coroner after Felton Roundtree decided to not seeking re-election after decades in the position. Chris Smith will be Clinch County’s new coroner, and was the only qualifier for the position.

There will be one school board race this year, but it will be in November. Eric Harris qualified as a Republican for the Post 2 seat, while Joann Lacey qualified as a Democrat for the same seat. In Post 3, incumbent Laura Landrum qualified without opposition. In Post 5, longtime school board member Charles Handley chose not to seek re-election. Fellow Fargo resident Gayle Infinger qualified without opposition to take his place.

The primary election will be held on May 19. The Sheriff, Probate Court, and all three county commission races will be on that Republican primary ballot.  The winner of the Republican primary for Probate Court Judge will then face Godwin in the November general election. The renewal of the county SPLOST (Special Purpose Local Option Sales Tax) will also be on all ballots on that date.

The only other local contest on the November ballot will be the one school board race, for Post 2.