This past week, more than a few people have found a letter in their mailbox with a picture of their vehicle and a close up of their car tag declaring a speeding violation in the school zone in front of Clinch County High School.

The good news is: This is a warning. The bad news,  according to Homerville Police Chief Desmond Dilorenzo, is the warnings will end September 14.

Last year, the Homerville City Council began discussions with Blue Line Solutions for the installation and oversight of a LIDAR – Light Detection and Ranging equipment –  that will enforce the 25 mph speed zone on Highway 441 during the hour prior to school, from 7:15 a.m. until 8:15 a.m., and after school from 2:45 p.m. until 3:45 p.m. 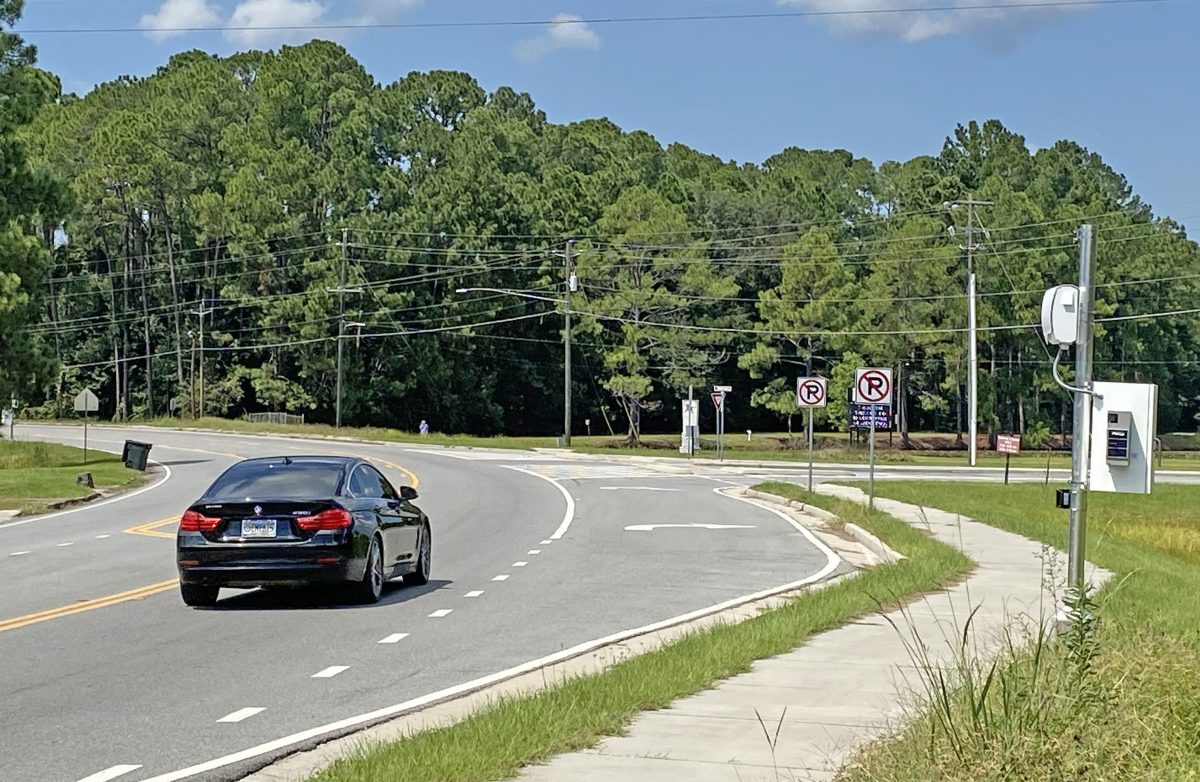 A vehicle travels in front of Clinch County High School on Highway 441 (North Church Street), where the LIDAR camera measures speeds of motorists.

The two cameras, which have been installed over the summer, are aimed at two spots in the north and southbound lanes to determine speeds of the vehicle it targets. If the vehicle exceeds the limit by 11 mph, the camera shoots a photo of the license plate, which is verified through a national tag data center,  and a citation is issued for the owner of the “captured vehicle.” All citations allow the local police to have final dispensation,  plus  motorists have the opportunity to challenge in city court.

A speeding ticket is a civil penalty, and under Georgia code, costs $75 plus a $25 processing fee set by Blue Line.  Additional offenses are $100 and $125 with the added processing fees. Council stated last year this would not be in effect until an education period for motorists. During that time, all citations issued would be a warning, plus announcements would be made to make the community aware of the new school zone equipment.

Dilorenzo said signs have been posted, which are before the cameras that state “Photo Enforced.” He indicated no other announcements or signage are planned currently.

The cost of the service is based on percentages of money collected,  with Homerville Police Department receiving 65 percent of revenue and Blue Line receiving 35 percent. In earlier City Council meetings in February, Dilorenzo stated this would improve the coverage of the police by allowing officers to patrol other areas while the cameras managed the school zone and improving safety in the area. Dilorenzo said the cameras could also be used to solve other crimes and in search for wanted vehicles on Highway 441.