The Clinch County Panthers will be facing a murderers’ row for its 2021 football schedule.

On the slate for the upcoming season are two defending state champions, seven teams that made the playoffs in 2020, and a non-region group that went a combined 36-7 last season.

“It’s probably as tough a schedule as we’ve ever had,” said CCHS head football coach Don Tison, whose team is coming off a 9-4 year that saw them advance to the Class A semifinals for the sixth straight year. “It’s brutal. For our non-region schedule, we start with Macon County, who beat us last ye 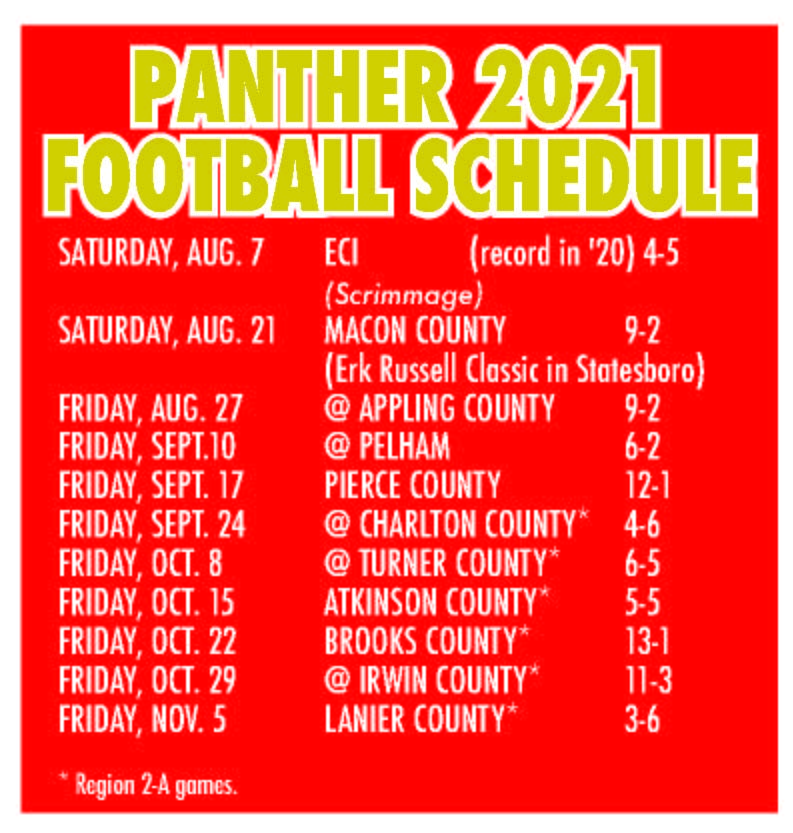 ar and returns about everybody. Some people are saying they’re a favorite to play for the state championship in Class A. Appling (County) is a top team in Class AAA, and went 9-2 last year. Pelham is a strong Class A team. And Pierce County is the defending state champ in AAA. We’re going to have a very young team, but we’re going to have to grow up in a hurry with that non-region schedule.”

The pandemic scrambled two-year schedules in Georgia, so some of the teams on the 2021 slate (Appling, Pierce) didn’t play the Panthers in 2020.

The Panthers will have a preseason scrimmage at Donald Tison Field against ECI on Saturday, August 7th. Two weeks later, Clinch opens its regular season in Statesboro in the Erk Russell Classic against Macon County on Saturday, August 21. The Panthers were supposed to open in that game at Georgia Southern’s stadium vs. Lincoln County in 2020, but the contest was cancelled due to the pandemic, and the Panthers went to Macon County instead, falling 21-19. The following week, on Friday, August 27, Clinch will visit Class AAA’s Appling County (9-2 in 2020). After an off week, Clinch will visit Pelham (6-2 in 2020), whom the Panthers didn’t play in the regular seasonlast season, but did meet in the playoffs. The last non-region game will be the Panthers’ first home game, vs. Pierce County, Class AAA’s defending state champion.

The Region 2-A schedule is the same as last year, with the venues swapped. Clinch will open the region slate at Charlton County September 24, followed by a trip to Turner County on October 8th. On October 15, Clinch will host Atkinson County, then host Brooks County the following Friday (October 22). The regular-season schedule will end with a trip to defending Class A champ Irwin County on October 29, then coming home for Lanier County on November 5.