Right after the freshman righthanded pitcher from Clinch County had his best performance of the young baseball season for Georgia State, earning his first collegiate win – they cancelled the season.

His former Clinch County Panther teammate, Tate Kight, had similar luck at nearby Georgia Gwinnett College. The Grizzlies were on fire, winning 21 straight, when the advent of the Coronavirus ended their campaign. 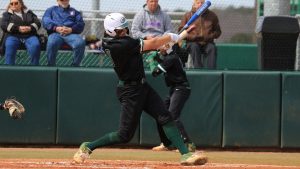 “I think they probably made the right decision (in cancelling the season), but do believe they called it a little early,” said Lutz, who is back in Homerville, taking college classes online, instead of playing baseball this spring.

Kight, a junior first baseman at Georgia Gwinnett, had a similar take on the entire college baseball season being cancelled in early March.

“I wish they had postponed it (the season) two weeks at a time,” Kight said Monday,  while also in Homerville. “I think that approach could have saved part of the season, if it worked out.”

Kight, who graduated from CCHS in 2017, was ripping the ball prior to the cancellation of the season. He was b 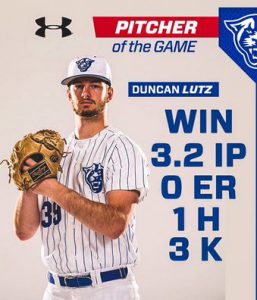 atting .333 with four homers and 19 RBI, and eight doubles. His Grizzlies were 23-2 and ranked third in their NAIA division.

“I really wanted to finish this season,” Kight said. “We were third in the nation, on a 21-game winning streak.”

Lutz, in his freshman campaign at NCAA Division I Georgia State, had his best outing in the Panthers’ last game, against UNC-Asheville on March 11. He was named the GSU Pitcher of the Game, coming in relief, pitching 3 2/3 innings, striking out three and allowing one hit and no runs. For the season, Lutz had five appearances, striking out nine in eight innings, with a 3.38 ERA for the 9-7 Panthers.

“Last year, we (Georgia State) were 15-41, so we were really improving this season, and that’s what is so disappointing,” said Lutz.

“That’s the good part,” said Kight. “As good as we were this season, we’ll have everybody coming back next year. This year was great, but a can’t wait to see how good we can be next season.”

Lutz, a 2019 CCHS graduate, has a similar optimism.

“That’s another year for me to get bigger, stronger, and better,” he said.

With the COVID-19 pandemic causing so much uncertainty, Kight and Lutz both don’t know whether their summer plans will come to fruition. Kight had planned on playing summer baseball in the West Coast League. Lutz had plans to play in the Ohio Valley League for a team from Kentucky. 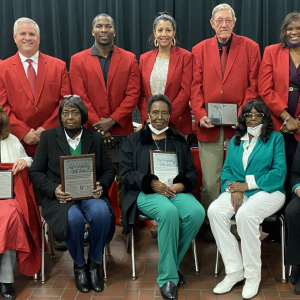