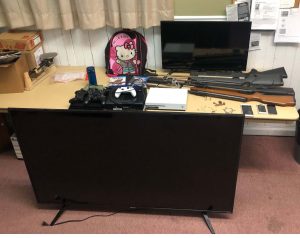 Homerville Police hope they have ended a crime spree with the arrest of a local man Tuesday.

Tuesday, Homerville Police arrested Tavorus Jamal Williams, 18, of Homerville, and charged him with multiple counts of burglary. He is accused of burglarizing three Homerville residences, and trying to break into one car. The investigation is not complete, according to Homerville Police officers, and they expect more arrests in the case.

Officers recovered several items Tuesday that were reported stolen during the spate of burglaries, including a 70-inch television, firearms, computers, gaming systems, and cell phones (see photo). Earlier in the week, local law enforcement warned citizens to be cautious about locking vehicle and home doors due to the burglary spree (see story in this week’s edition of The News). Burglaries were reported on Courtland Avenue, Court Street, Gibbs Street, Cypress Circle, and Happyville Lane, and in Dupont, among other places.

The News will have an update, and more details, in its next edition.