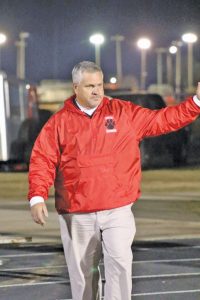 Dickerson announced his retirement at Thursday’s Clinch County Board of Education meeting. He is retiring as the winningest football coach in CCHS history, with a record of 152-44-1. His Panthers recently won the 2018 Class A football championship, and have won three state crowns in the last four years. During his tenure as head coach, the Panthers were region champions seven times.

Dickerson has been at CCHS, his alma mater, for 30 years, and said his retirement will be effective after this school year.

“I’ve been blessed to work for this school system,” he said at the meeting Thursday. “I appreciate all the support we’ve received from the school board and our administrators.”

At Thursday’s meeting, Dickerson was recognized by the board and Superintendent Dr. Donna Ryan for his career and this past football season. During his remarks, he announced his retirement, and thanked the board and school system for their support during his career.

Dickerson started his coaching career at CCHS as a volunteer assistant for Coach Donald Tison during the 1988 state championship season. The next year, he was hired and worked the next 15 years as a Panther assistant, including being defensive coordinator from 1994-2003. In 2004, he succeeded Cecil Barber as head football coach, and won his first state title as Panther head coach. State championships followed in 2010, 2015, 2017, and 2018. He also coached the 2006 team, which was the state runner-up in Class A.

“It wasn’t a hastily-made decision,” Dickerson said of deciding to retire. “I knew coming into my 30th year (of teaching) that it (retirement) was a possibility, and I had mentioned I was thinking about it to our coaches and players. I prayed about it, but wasn’t entirely sure until after Christmas. It was a hard decision because I’ve been blessed to be able to do something I love in a place I love. Going out with back-to-back championships, and on my own terms, made it a lot easier.”

The Clinch County School System hasn’t indicated how they plan to go about replacing Dickerson as head coach.

Dickerson said he will continue to teach and coach (he coaches track during the spring) until his contract expires in June. He said he has no definite plans for his retirement.

“I really appreciate the school board and administration and community and all the support they’ve given to our football program over the years, and to me personally,” said Dickerson. “I’d really like to thank God for the blessing of being able to coach here. He’s blessed me with great coaches who were very loyal, and great players. Our success doesn’t have anything to do with me. God blessed us with everything we needed to be successful. It’s amazing what we’ve been able to do, and God blessed us with, during my time coaching here.”