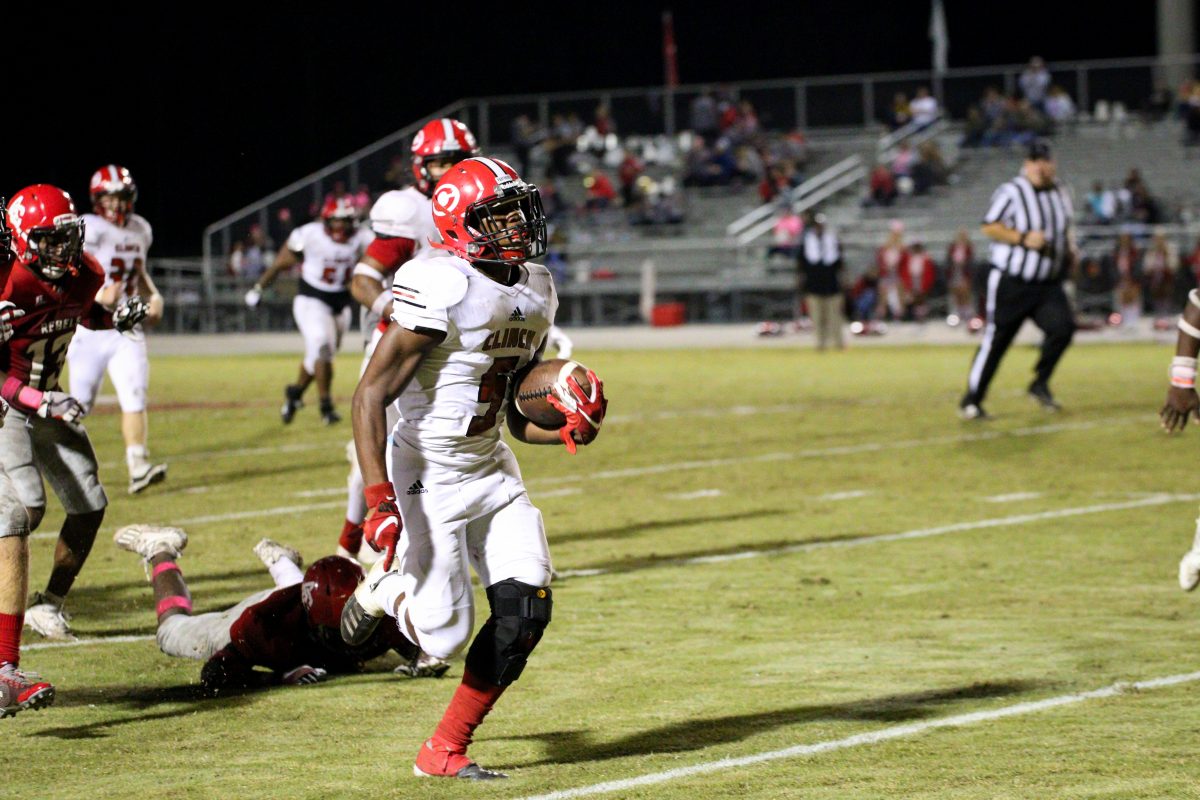 For the first time this season, the Clinch County Panthers had their full array of skill-position players healthy and on the field Friday – and the difference showed in a 45-20 victory at Atkinson County.

Don Tison’s Panthers led throughout the game, improving to 4-2 on the season with the Region 2-A victory, as two-time All-State back Tyler Morehead returned to play for the first time in 2020 against the Rebels.

Morehead played only on defense, accumulating five tackles, not taking a snap on offense. His teammates did just fine on that side of the ball, as quarterback Dillil Carter was 2-of-2 for 100 yards and two touchdowns passing, and Elijah Tiller had three first-half touchdowns.

“It felt a bit like we were back to normal tonight,” said Tison, whose Panthers have had two outings cancelled due to COVID issues this season. “I thought we played well overall as a team. We took what they gave us offensively, and saw improvement. We’re not near where we need to be yet, but we saw a lot of progress tonight.”

Three explosive plays by Tiller gave Clinch a 22-7 lead at half.

The Rebels had possession first, and faked a punt on 4th-and-2 from their own 28, losing two yards.

The visitors made them pay rather quickly, on a 21-yard touchdown run by Tiller on 3rd-and-5. The ensuing kick failed, leaving Clinch with an early 6-0 advantage.

Marquavious Grady intercepted a Denzel Stewart pass with 6:09 remaining in the opening quarter, giving the Panthers the ball at the Atco 40.

Tiller then struck again on the counter – this time for a 28-yard rushing score. Dillil Carter then hit fullback Marvin Gainey out of the backfield for the two-point, giving Clinch a 14-0 lead with 3:03 left in the first period.

The Rebels answered with a scoring drive of their own, starting at their own 20 and marching down the field behind Stewart’s arm. He ended the drive with a 22-yard scoring strike to Tra’Vonte Williams with 10:41 left in the second quarter. Bonnacacio Torres made the extra-point boot for a 14-7 tally early in the second period.

It didn’t take long for Clinch to answer. On 1st-and-20 after a penalty, Carter threw a dart to a streaking Tiller out of the backfield, who outran everyone to paydirt for a 90-yard touchdown toss. Carter ran in the two-point coversion for a 22-7 Panther advantage.

The Rebels threatened to score right before half, throwing an incomplete pass on 4th-and-goal with 16 seconds left in the first half.

Clinch led by 15 at halftime despite only have 11 offensive snaps in the first half.

The Panthers doubled that amount of offensive plays in their first series of the second half, which ate up half the third quarter and resulted in another score.

This time, Carter found tight end Zachary Cason on a 10-yard touchdown pass to end the 70-yard drive. Carter then hit Perry Williams on the two-pointer for a 30-7 Clinch lead with 5:47 remaining in the third stanza.

The Rebels also scored on their first possession of the second half, finishing a quick drive with a Dayton Davis 6-yard TD run with 4:15 left in the third quarter. Torres made the EP boot to cut the lead to 30-14.

It took a little over two minutes for the Panthers to change that tally. Marquavious Grady finished the short drive with a 32-yard touchdown run with 2:00 left on the third-quarter clock. Tajuan Gordon ran in the two-point conversion for a 38-14 Panther lead.

Gordon then stopped Atco’s next possession by intercepting Stewart on the Rebel sideline with 1:44 remaining in the third quarter. Clinch cashed in the turnover with a 47-yard touchdown run by Amazi Williams with just 10 ticks left in the third period. Isiah York nailed the extra-point kick for a 45-14 Clinch lead going into the fourth quarter.

With a running clock, the Rebels pieced together one more scoring drive, with Stewart having a 1-yard touchdown run against the Clinch reserves. The run for two failed, leaving the final score at 45-20.

The balanced offensive attack for the Panthers was led by Grady’s 87 yards on 12 carries, while Amazi Williams had 54 yards on two carries, and Tiller had 47 yards on five totes. Defensively, Omarion McRae led the Clinch defense with eight tackles, while Morehead, Perry Williams, Gordon, Carter, Kahlil Jenkins, Danny Fountain, and Amari Hodges all have five tackles apiece.

This week, the Panthers will go to Quitman to take on Class A’s third-ranked Brooks County. Kickoff is set for 7:30 p.m. The Trojans are 6-1 on the season, with their only loss coming to defending state champ Irwin County. They were off this week after their game against Charlton County was postponed.

The game will be broadcast live on WBTY (FM 98.7), starting at 7 p.m. with the Panther Power Station Tailgate Show. The game will also be streamed live online at www.classichitsWBTY.com. 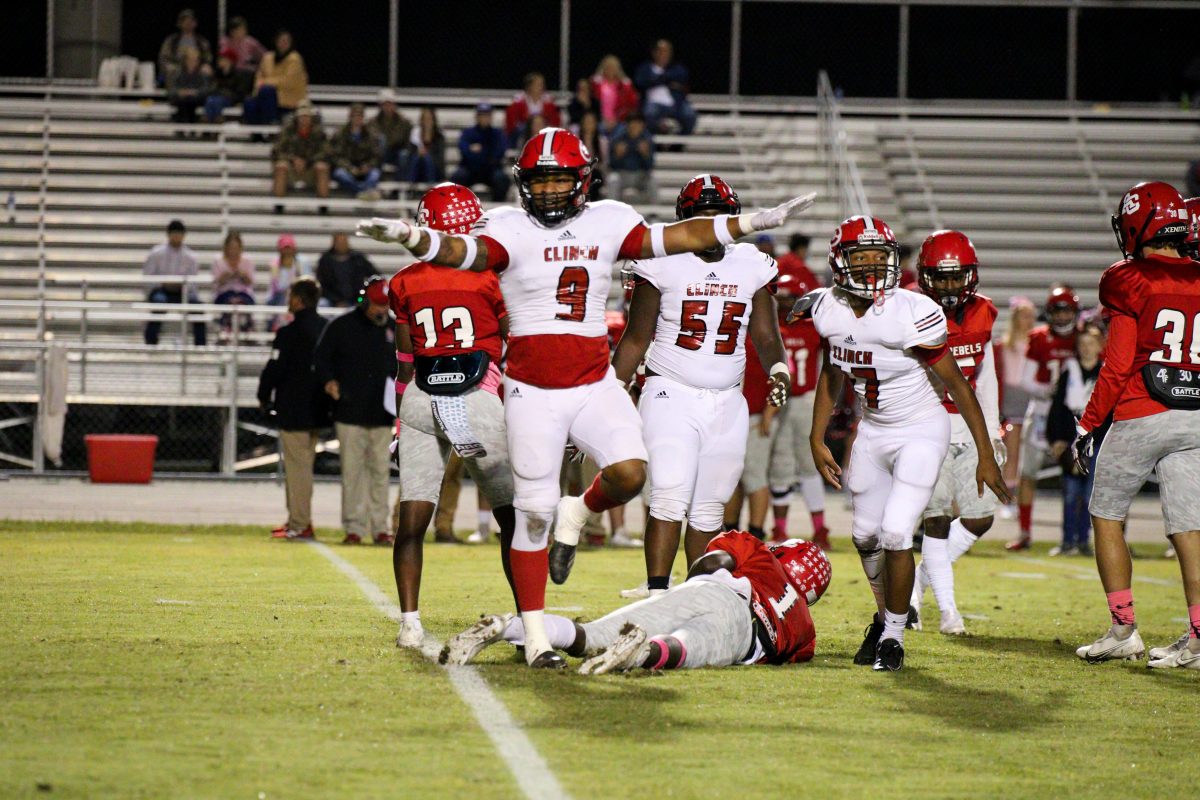