Saturday in Baxley, the Clinch 8u team defeated Brantley County 35-25 to claim the district championship. They now advance to the state tournament. They start play in that with a seeding game Friday in Clayton, Ga. at 8 p.m.

Recreation Director A.C. Cooper said the team is looking for sponsors for assitance with costs of transportation and lodging for the state tournament. Clayton is located on the Georgia/North Carolina line in North Georgia. He said that anyone interested in helping can call him at 912-599-0181. 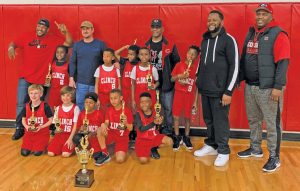 Members of the Clinch 8u team, their coaches and Recreation Director A.C. Cooper pose with the GRPA District Championship trophy after winning it Saturday in Baxley.