Reverend Ken Jones was honored on Sunday, August 25 at First Baptist Church of Homerville for his retirement after 35 years of service to the church. 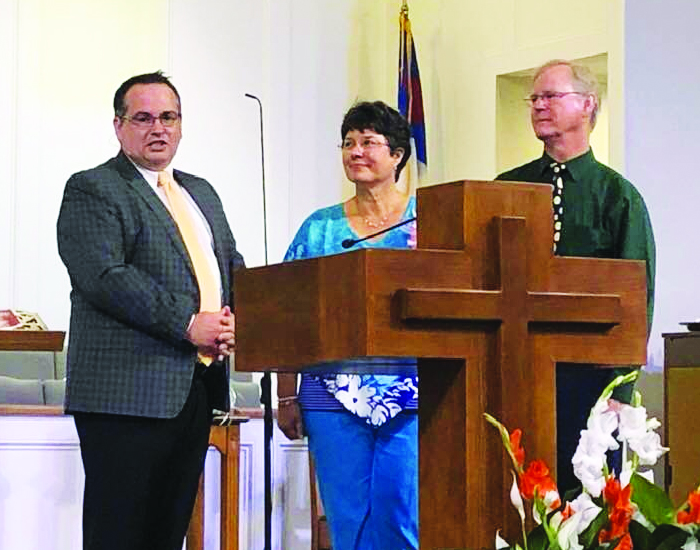 The services opened with  Homerville Mayor Tom Kennedy making a proclamation declaring August 25 “Ken Jones Day” in Homerville. The choir performed three of Jones’ favorite selections from past cantatas. The crowd enjoyed a slideshow featuring Ken and his wife, Beth, during their ministry at First Baptist that included messages from the Executive Director of Georgia Baptists, Georgia Commissioner of Agrigulture Gary Black, Senator David Perdue, Congressman Buddy Carter, and Governor Brian Kemp, all congratulating Jones on his 35 years of service to his community and church.

Pastor David Taylor, who hired Jones is 1984, shared about meeting Jones in the 1970’s and how their paths continued to cross, eventually leading them to work together at First Baptist Church. Lori Smith Mathis shared a song that she learned while in Jones’ youth program that she has now taught to her daughter and spoke about the impact that Ken and Beth have had on her life.

The Jones’ were presented with gifts from the church and Ken and Beth thanked everyone for the love and support shown to their family throughout the years. A covered dish luncheon followed in the fellowship hall. 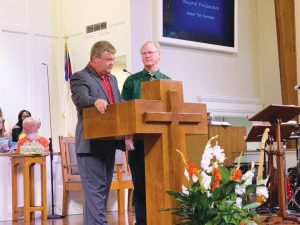 Ken Jones, along with his wife, Beth, came to Homerville in 1984 to serve as Minister of Music and Youth at First Baptist. Jones also worked in the Clinch County School System as a middle school science teacher and then as the media specialist until his retirement in 2014. Beth, a registered nurse, retired from the Clinch County Health Department in 2013, but continues to serve the community as a substitute nurse, helps with the CNA program at Clinch County High School, serves on the Board of Health, and Clinch County Hospital Board.

Their son, Joshua, was born in 2000. He graduated from Clinch County High School in 2018 and is currently enrolled at Georgia Southern University.