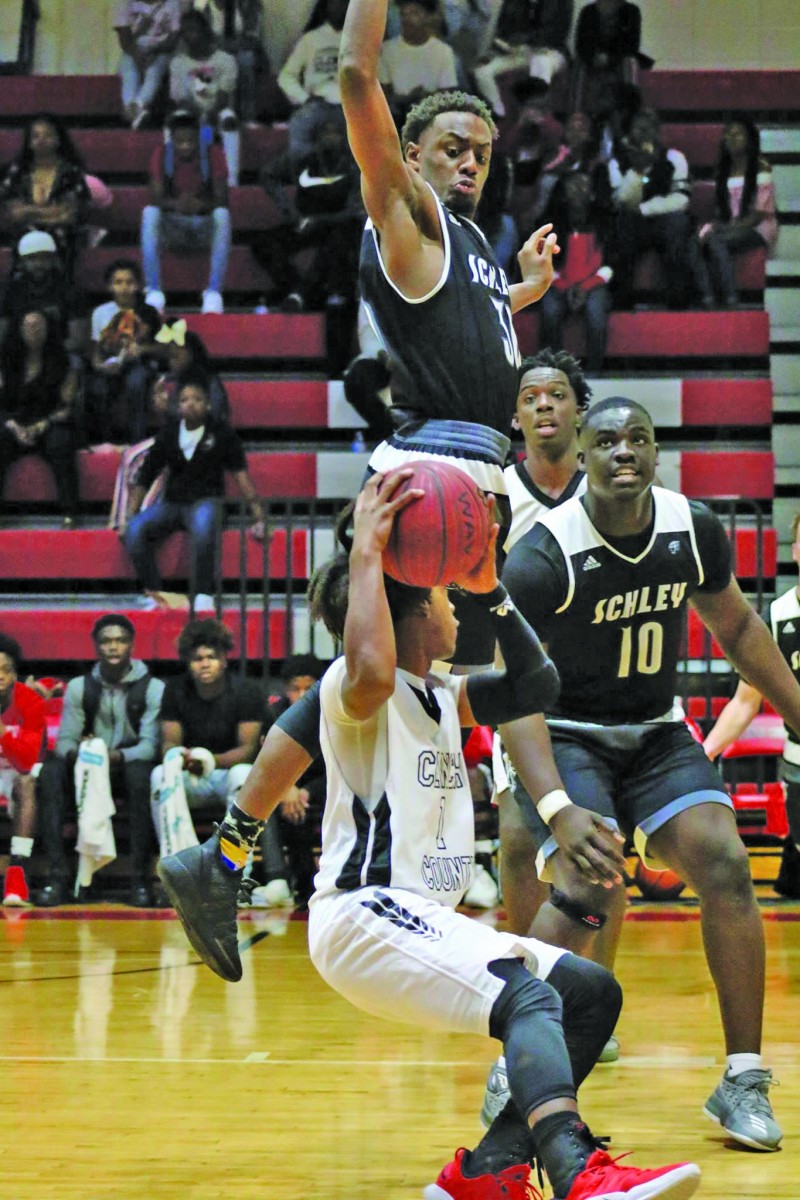 Both the Clinch County Panthers and Pantherettes are participating in state playoff action this week. The Pantherettes will host Mitchell County Wednesday at 6 p.m. The Panthers will travel to defending state champ Wilkinson County Thursday. Above, Keshaun Tolbert pump fakes in the lane against Schley County in the playoffs’ first round Saturday.

Keshad Lee hit a bucket with seven seconds left – and the Clinch County Panthers survived two last-second shots from Schley County – to survive in the Class A playoffs Saturday, 53-52.

Terrence George’s Panthers led most of the game, but allowed the Wildcats to take a lead in the fourth quarter. Schley had a one-point lead and the ball when they missed a shot with 25 seconds left. Lee got the ball, drove to the basket, missed the first shot, then got his own rebound and put it back in for the winning backet. Schley had two shots in the last seven seconds – neither of which connected in a physical game. Very few fouls were called in the paint in the game on either team.

“We had some ups and downs in that game, and let them get back in the game late,” said George. “We need to realize playoff basketball is different from regular-season basketball. You can’t expect a foul to be called every time in playoff basketball. We’ve got to be quicker to adjust to that.”

The thrilling win moves the Panthers (18-8) into the playoffs’ second round, where they will face Wilkinson County (19-9) Thursday in Irwinton at 6 p.m. The Warriors (19-9) are the tournament’s fifth seed, have won the last three Class A state championships, and are on a 13-game winning streak since starting the season 6-9.

Against Schley Saturday, Panther junior Jeremiah Johnson got off to a hot start, scoring 10 of the Panthers’ 14 points in the opening quarter. Clinch led 14-11 after one period, and 29-22 at halftime.

Schley battled back in the third quarter, tying the game at 37-37 going into the final period.

Clinch trailed by as much as five in the fourth quarter.

The winner of Thursday’s Wilkinson (5th seed)/Clinch (12th seed) game will move on to the Class A quarterfinals, facing the winner of Chattahoochee County (13th)/Marion County (4th). (See brackets for details).

Meanwhile, the Clinch County Pantherettes will start their playoffs Wednesday at home vs. Mitchell County after receiving a bye in the first round of the playoffs.

Admission is $7 to Wednesday’s game at the CCHS gymnasium.